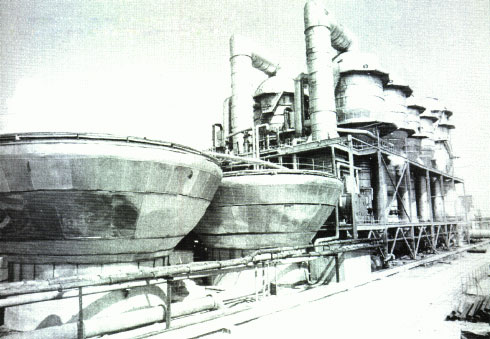 The desalination of seawater needs to be re-invented!

Interestingly enough, whilst scientists can put man on the moon, split the atom and build driverless cars we just cannot cope with the water shortage. We can create distilled water from permeable membranes and a vacuum desalinator but it’s never enough or just not cost effective.

The natural process of distilling fresh water from seawater is found in the form of rain, the cycle of evaporation and collection  of water. After thousands of years we can pipe oil but it still remains a mystery as to how to pipe fresh water. Is there really an Utopia? Maybe if the ancient Romans, Greeks or Egyptians were still around they would have given us the answer.

Ship or marine fresh water generators methods have almost always been of the vacuum type getting heat from the main engine or prime mover. Often where there is drought we sit with very high climatic temperatures. Often this is right at sea level and indeed often on the coast. Israel is possibly the world leader when it comes down to fresh water recovery and the efficiency thereof. Egypt has also proven to be very resourceful in this area. Small solar desalinators have been manufactured using the cone design, Watercone being one of the most popular. This is by no means new or unique. As a boy scout you may have used plastic sheet to harvest the sun’s energy causing evaporation, running the condensation into a capturing mug or jug. For survival this has long been common practice.

The issues that  arise during drought conditions are not only human based, we can be resourceful. Not so with cattle or most animals for that matter. We need water to survive, lots of it.

When a ship gets scrapped what happens to those old desalination plants? Can we use coal or any fossil fuel as a heat source.  Can nuclear energy be our saviour?  In a report it is noted that to produce 1 million gallons of fresh water (distilled) we use about 15MW of energy.  (Bloomberg).  Our seawater has a salt content of about 40g/l whereas the brine byproduct stands at about 60g/l. (sidem-desalination). Although it is believed that the injection of brine back into seawater will be balanced we also need to be skeptical.  Balancing eco systems are rarely as  simple as reciting our abc.

From Norway to the Dead Sea

There are always some obstacles in the way of having a successful water supply and although city dwellers do not experience drought horrors on the same level as agriculture or livestock farming it must never be forgotten that over-population is a big problem. When there is a shortage of water in any city there’s going to be mayhem.  Mayhem created by short-sightedness, lack of planning and complacency by local government and ourselves.

Droughts have been with us for ages but the modern scientist still battles to innovate and compensate. We don’t need electricity but we do need to hydrate. Washing becomes a secondary need. Water is used in abundance in any industry,  steel in motor car manufacture is a big culprit. The eco driven reader should know just how much water (fresh) is circulated to manufacture one ton of steel.  Guestimates put this at about 60 000 gallons (250 000) liters for one ton. These figures vary from source to source.

Good town planning requires vision but often it comes down to crises management. We do need to consult middle eastern academics, engineers and technical advisers, experts in the field. Often we find an immediate short term solution but never a long term one. Remember the good old days when scientists talked of tug boats bringing in ice from the Arctic region?

On a large scale we need to understand and utilise geothermal activity where and if possible.  Simple Sterling engines can be used to drive pumps to move contaminated water and generate a vacuum. Standard chlorination processes to be followed to prevent algae growth and further purify the water.

Instead of abusing tax payers money have your number one project linked to generating fresh water in the same manner as nuclear powered ships and submarines. This may not be cost effective but will act as a relief in emergencies. A small ship may generate about 30 tons of fresh water per day. (note that ships also do have drinking water tanks – the fresh water generation does not necessarily comply with a safe drinking water specification). What happens to gear in shipbreaking yards?

Inexpensive techniques using electrolysis is also explored as explained by Lisa Zyga. The water here is not seawater but brackish water with moderate salt levels.

Reverse Osmosis (also used in the maritime industry but an expensive alternative although claimed to be more energy efficient than other means) – Wiki.