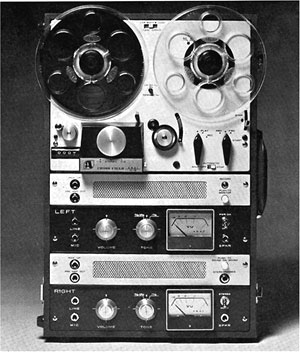 The Revival of the Akai M8

Those who were around in the 1960s will remember the furor caused when this machine came to market. I dedicate this article to my late father Chris whom had one.

The Akai M8 was not the best machine out there, neither was it supposed to be at the price point it was released. It certainly wasn’t cheap but more to the point, those that had the test tape will remember that it’s fame was not around the tape quality at 15 i.p.s. but rather 1 7/8 i.p.s. and the Cross Field Head, licenced by Tandberg. Many audio enthusiasts unfairly compare this machine to professional machines at the time which came out with three motors.  The point here is that a machine with one motor is often more difficult to design compared to one with three motors. These motors can be very expensive and in order to mass produce at an affordable price point there was usually quite a bit of sophisticated engineering involved. (a case in point is that many enthusiasts in the 50s and 60s used to design and build their own mechanisms – often with three motors. Solenoid and switch control is easier to design (and build) than manufacturing cams, linkages and gears).

The M8 has made its appearance again over the last 5 years, not for it’s marvellous deck but for it’s audio amplifiers. I recently purchased one and will be restoring the deck and the audio section. A good price is usually around 100 dollars for a working unit. I paid about 65 dollars for mine. I do not know whether the amplifiers work because I should run them up through a variac first (which I don’t have) but the deck does need some maintenance. Strangely enough the pinch roller is not in bad nick although the belts will need replacing. This unit must have been kept in storage for some time gauging by a look at the casing.

Wow and flutter, hum and noise and cross talk may not have been perfect but I do recall on the new machine recordings of piano playing were usually exceptional – I recall this because I was ten at the time. When my hearing was still intact. A ten year old doesn’t know what wow and flutter may mean but will certainly complain if it was audible.  The other thing, at 15 ips these machines were very capable. Most RTR of the time were only 3 3/4 ips and looked their age. The M8 in comparison looked like a space ship. No, it’s not a Zoom H6 but in capable hands and with good quality tape some pretty damn near professional recordings could be had.

This deck will be restored because I do believe the transport mechanism is not in bad shape (which we will come to later). Quite often on the forums we have the vintage collectors pleading for owners not to cannibalise or modify these decks for the amplifiers but personally speaking if the deck is in bad shape it may just not have any value to the owner in any event. Many of the students of tube technology have absolutely no interest in the deck – only the sound of the amplifier.  My recollection is that the amplifier quality was not bad,  a fairly flat response and the reproduction of vinyl was crisp. This was also in the 70s when transistorised amplifiers were making their mark. Not knowing much about audio quality I do recall the solid state amplifiers as being powerful and crystal clear, the tube amplifiers were just lost in all that power and “perfect” imaging of the program source.

I do not believe that tube amplifiers are better than SS. I do believe that they sound different and depending on their use tubes can be superior. I do not believe that tubes should be used for home theater and in my own experience if one needs a tube microphone preamplifier it should be all tube. Power amplifiers are cheaper in SS format and we shouldn’t be clipping them in any event unless that’s the desired sound required. Tubes are remarkably resilient and for those that now claim they have a lifespan of two years then I wonder how CRT manufacturers got away with for so many years. My personal favourite is Mullard. Tube biasing is a personal cringe I have. We have so many different types of biasing now available today one must wonder if the engineers of yesteryear were just plain stupid. No, it’s all marketing hype. I have worked on transmitters delivering thousands of Watts to the load and the only advantage we have in modern times is that the critical safety circuits have all gone the SS route. Because it’s cheaper and more compact.

The EL84 output stage of the M8 is nothing unique. The design was very popular and of course the EL84 was definitely one of our more popular tubes. In the USA we have other permutations and audio engineers had their own preferences, often very valid. Compare USA and Brit guitar amplifiers for instance. The more popular “Hi-Fi amp” was the push pull version of the EL84 amplifier. In the 70s I rarely came across any tube amplifier reproducing more than 15W and the El34 was seen as an extravagance – quasi-complimentary and complementary transistorised amplifiers were becoming popular, didn’t smell as much and were way more efficient. I mention “smell” here because anyone not familiar with tube equipment will think there’s something wrong when first powering up their vintage piece of equipment.

Tube amplifiers use in most cases dangerous voltages on their anodes (or plates) and screen grids. The supply rails can be anything above 250V DC and in high powers 750V or more. This will cause serious burns and God forbid, your early demise if you are not careful. Ensure the equipment is switched off and unplugged. Discharge all smoothing capacitors either across their terminals (better) or across ground and + rail.  Do not use your multimeter probe to short out the capacitors if you value the probe. Tube circuits use high impedance and it’s not advisable to “probe” around on the control grid circuits unless your meter has a very high input impedance.

This Akai deck is often compared to decks costing very much more.  Indeed the M8 does not have a boastful spec compared to modern equipment but then again neither does Tandberg, Teac and Revox/Studer. The Akai GX series were funky looking and the quality on spec often superior to the older tube amplifiers and single motor decks. They can be obtained off eBay for fairly realistic prices. Magnetic material (composites) used on tape for recording and the biasing also plays a remarkable role in the end product.

Interesting article here:  The Roberts Akai relationship at the museum of magnetic sound recording. (we include this because there has been a large amount of nonsense written about these two brands in the forums).