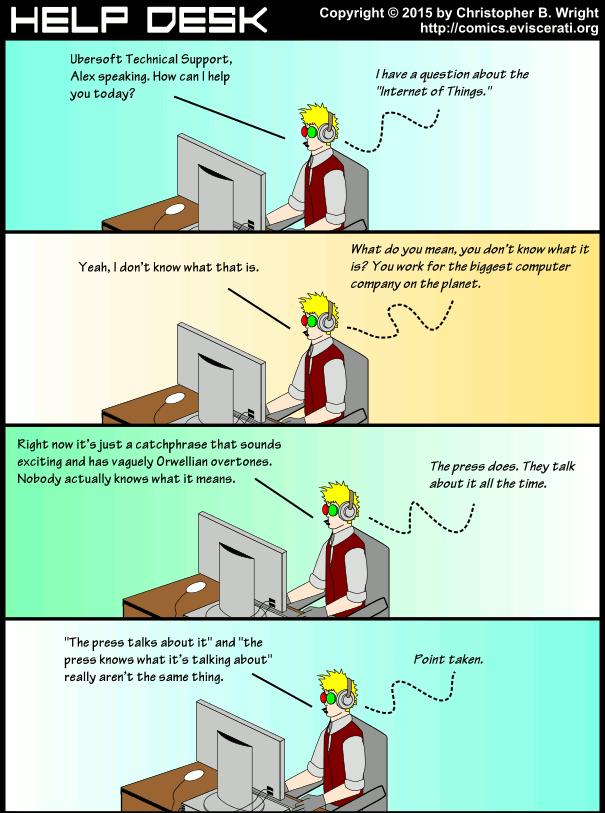 The Internet of Things

The Internet or Nothing

Is IoT another load of hype coming your way? Do you talk to your toaster?

An interesting fact about the web over the last 20 years has been how it has grown to be the single most used tool along with the laptop, home computer or Smart Phone next to a light switch or a TV remote control.  Just Google “Is the Internet making us Stupid?”

I for one get up early every week-end to catch the news and surf the web. Not that long ago we had newspapers delivered to our door. When we need something looked up we no longer go to the library and take out a book, Google is there at our fingertips. When we have a medical problem we look it up on Google. Car problem? Alien vegetation? Google is our friend. Thanks to the Internet!

This work is licensed under a Creative Commons Attribution-Noncommercial-Share Alike 4.0 License.

Now go back forty years. You leave school, you do not do an aptitude test – you go to where you think you want to be, maybe a bank, armed forces, study English, split the atom or become an artisan. All your notes are already in Portable Document Format i.e. in hard print. You become an artisan, you become an electrician, a plumber or welder. You become a mechanic, boilermaker, sheet-metal worker, fitter & turner or electronics technician. All of these jobs require either an academic or practical approach.  The internet made things easier if you took an academic approach but, the emphasis on but – don’t trust everything you read. Books were more reliable to get information from, you know the author and his or her credibility. On a practical level you need to weld or cut, fit, turn, mill and test.  A book can show you but the best artisans are those that fit the trade and have experience. (meaning have the aptitude – there aren’t many lawyers that make good motor mechanics, neither fitter & turners making good accountants).

The internet made some of our jobs easier. Reading is never a substitute for doing. You’ll get lots of advice on the web about milling, repairing motor car engines and installing geysers. Most of it by people that have never done it in the first place. We can get legal information easily on the net, some it may make sense, some of it not. Try to learn to weld through the thousands of returned search results and you’ll be surprised by the results.

Making sense of the Jungle

All the theory can be obtained on the internet if you know where to start. Like most courses which direct the learner – in electronics you do not start with the magnetron, you start with thermionic tubes. You also start with Ohm’s Law before resistor colour codes and then of course you go on to thermionic emission, germanium and silicon diodes and bipolar transistors.  Trouble-shooting is more or less in the same order. This is where things start going wrong, losing pieces to the puzzle.  The Internet can be a jungle.

The best artisans are those that trained through family – a genetic hand me down (passion and raw talent), those that trained in a real live workshop and lots of theory to become qualified – this means hundreds of hours at the lathe, welder, milling machine, but very seldom the through the pages on the web. Is this changing?

CNC (Computer Numeric Code) machines and 3D printers are not new, in fact the first CNC machine was designed and built over 50 years back (NC or Numeric Controlled). The fact that our desktop computer made things easier, the serial port controlling a batch of stepper motors through their relevant drivers made this a stepping stone for already qualified machinists. The fact that this in turn lead to the first 3D printer in the early 1980s meant historians need to start revising their theories on the Industrial Revolution which in our case did not exist through the the 1800s but rather from about 1800 to present and still continuing. Machines keep on making us humans obsolete until something goes wrong.  Aren’t machinists and electricians the best people to have around when a machine goes wrong? When your ADSL connection goes haywire will your microwave self destruct? Do we now need computer technicians to fix our fridge or milling machine?

The Internet of Things (IoT)

If all objects were networked enabled and could communicate with each other are we taking another step forward in the field of robotics and artificial intelligence?  Or is IoT just an add on to the internet, like social media? Possibly. A typical example would be motor car engines fine tuned 3 000 miles away at the factory.  Definitely not ground breaking stuff! We are after all using technology as in it’s present form but through proper intelligence.  Home automation? Even with the most sophisticated security systems at our disposal the common and garden criminal finds his way into the modern home by using whatever devious means they have. We rely on electricity, power and wireless or cable, all known to have weaknesses. The more we interconnect and become reliant on other devices the less reliable it really is. The Internet of Things may seem like a great vision but maybe it’s been with us for some time already. Possibly when Samuel Morse was born, or Marconi.

Coming Back to Planet Earth

Professor Leonard Kleinrock published “Information Flow in Large Communication Nets” in 1961. So we had the idea then already. Remember that scientists from Morse’s day already were trying to speed up data flow – who wants to learn Morse code if you can speed-dial your partner through a cellular network? Evolution. Packet exchange, TCP, DNS, IP, modems, switches and routers.

The interesting aspect to this whole saga is that the good Professor already had a grasp of what he wanted to do, nothing different – just a name.

The sad reality is that data exchange has been around for years and many people believe that IoT is going to change a lot of how we do things currently – it won’t because it’s here already. IoT is a wonderful abbreviation, another piece of technical jargon we can throw around at parties and impress our friends. I just don’t get it though. Tim Berners-Lee was the guy that cracked the www code and made the way in which we communicate so much easier. Communicating with our router is also IoT. So is handshaking and duplex working with morse code.

Please change the name to something which doesn’t sound so much like a Geek catchphrase but one which is meaningful and leans on the TCP/IP protocl. NFC is another cloaked Geek speak. Do you know that many electric toothbrushes work through a NFC to charge the battery. So does an induction motor.

I don’t use the internet to communicate with my Weber or Cadac. Neither should you. Ban IoT get a life!