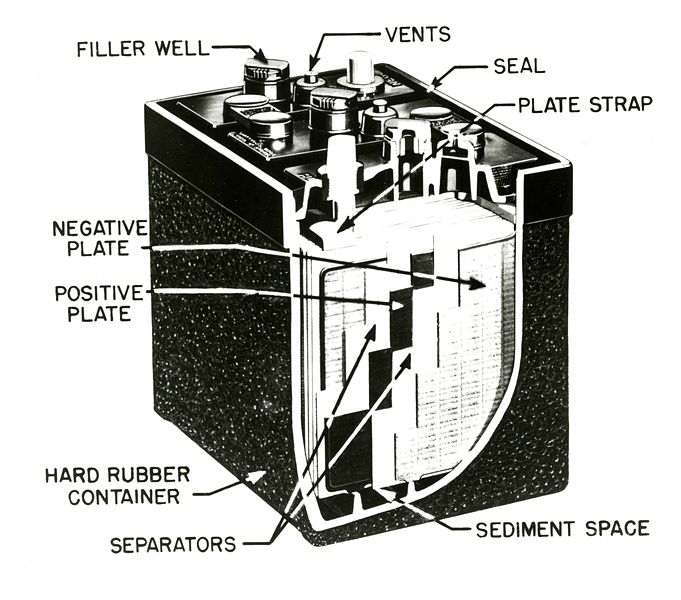 An elementary look at the lead-acid cell

The most common rechargeable or secondary cell used in car batteries is the lead-acid variety.  Even with the curb on hazardous substances, or RoHS, these still remain the most used battery in auto, marine and leisure.  Although so common there remains some disturbing misunderstandings of the common and garden starter and deep-cycle batteries. To keep a lead-acid battery maintained we will stick to the fundamentals, based on their chemical composition:

(+) Lead peroxide, lead dioxide (PbO2), (-) Sponge lead (Pb) and the electrolyte is diluted sulphuric (sulfuric) acid (H2SO4). Battery cells use an electrochemical reaction within the cell to produce electrical energy. The cells inside the battery contain plates which looks very similar to a bee honeycomb or a bunch of tiny square tennis rackets made from either lead calcium or lead antimony.  A good video on the reaction within the lead-acid call battery is shown below.

Your car starter battery is relatively lightweight but can output hundreds of Amperes for a very short period of time. These batteries do not like to be kept in a discharge state as sulphation (sulfation) starts very quickly, causing irreversible damage. This sulphation build up is the result of low specific gravity of the electrolyte, the lead sulphate becoming a stable crystalline over time which is deposited on the negative plate reducing reactive area for future use. I.e. reducing capacity.

All batteries have an A/Hr or Amperage/Hr discharge rate.  In the motor vehicle we are concerned about the cold cranking Amperes (CCA) and with deep cycle, the reserve capacity or RC. A motor car battery should not be discharged below approximately 80% of it’s capacity whilst a deep-cycle battery is designed to go below this. In other words the reserve capacity is much higher.

Car alternators maintain a steady (regulated) voltage and although can charge a flat battery it will not fully charge it. The alternator is designed to feed the car electrics and electronics, mostly designed around 13.8V. Some circuits are designed to push this voltage closer to 16V specifically to fully charge a car battery but these usually come as after market kits.

When maintaining any flooded cell battery, the type with the removable vents or caps, the SG is taken of each cell and if possible the battery voltage and temperature.

Modern car batteries can be of the Absorbent Glass Mat (AGM) type and the electrolyte is a gel. They were originally used in aircraft because of the weight (lighter than standard flooded cells) and their resistance to leakage. Like all batteries however they do not like heat and over-charge.  AGM batteries are found in nearly all UPS manufactured today.

To properly maintain a car battery it should be put on a smart charger once every few months. This tops the batteries up and reduces chances of sulphation. So what is the difference between a smart or intelli-charger and the Walmart entry level chargers?

A true smart charger follows these three basic rules:  [1] constant-current  [2] topping [3] float charge. The cheaper variety may be a high current device which will very easily damage the battery if left on overnight or a week. The smart charger can be left on for weeks at a time. The cheaper entry level chargers are even sometimes sold as trickle chargers but the reality is that the battery will never get a true float charge, the current may settle at around 1A which cooks the electrolyte once the battery has reached the typical terminal voltage of 14~14.4V.  Once this critical voltage is reached the charger must switch to a level of a 100mA or slightly higher charge current.  It must not cause the electrolyte to run hot or bubble/exhaust.

Can a deep-cycle battery be used for car starting? Almost definitely. Due to the higher reserve capacity they are more reliable but the A/Hr rating should be increased by a margin of at least 30% to get the correct CCA. They are often used for marine work, hence the name. Ships almost always used deep cycle batteries (lead-acid) or NiFe many years back. Due to the constant maintenance requirement, a legal requirement of course, these batteries lasted many years. These batteries were used to power the emergency radio equipment and a separate bank, for the starting of the emergency generator. Strangely enough, a log book was never a requirement for the emergency generator, only the radio gear.

@Gravytrain: I have no doubt that spilt electrolyte will damage the mariners as well as onboard electronics - it will eat into practically anything that is not plastic or gold. An important lesson learnt in the world wars was that the combination of electrolyte and seawater or brine will generate a healthy flow of chlorine gas which lead to the loss of life of many submariners. Chlorine gas is not to be trifled with - in high or prolonged doses it will kill you permanently. On smaller marine classes this may may not be a biggie, on submarines definitely. I stand under correction but lead-acid batteries also add to the stability properties because of their size and weight. I have been on a few 2nd WW subs, luckily never out to sea.

The most reliable batteries are lead-acid traction (fork-lift, deep cycle) and NiFe. They are expensive, traction batteries are usually sold per cell - this also makes them more cost effective in the long run. They do require more maintenance however. I believe marine batteries these days are all AGM, to prevent spillage and therefore damage to yourself and electronic equipment.

No matter which technology one prefers, lead-acid still is the most attractive in terms of energy yield to price value. Most buyers of this technology should also know that it's not uncommon for the rebated faulty to be recycled at an extraordinary rate of over 90%. It would be great if manufacturers can start supplying just the cells at a non rip off rate so users can replace just the dead cell. A very nice image of the lead acid battery cutaway can be found here under how it works: http://www.howitworksdaily.com/inside-car-batteries/