This reminds me of the first argument I had regarding the merits of mechanical VU meters over LED.

Yeah, we like vintage stuff, especially with those big VU meters. Hell, I was looking at the specs of the Pioneer SX-1980 the other evening and thought  what a beast this must have been in the 1980s. At 270W this is certainly by no stretch of the imagination much in modern times thanks to PWM, Class D and mounted on a one inch square heatsink.

As I am not Jeremy Clarkson here doing a review I’ll try not to hurt anybody’s feelings, especially those more knowledgeable than myself – of which there are many.  Vintage amplifiers are not better than modern amplifiers and certainly can never be. Modern equipment is designed to be small, a cinch to interconnect through Wi-Fi, Bluetooth and of course has multi-channels for your movies. Thanks to Ones and Zeros.  The age old argument arrives and then we need to rethink this logic.  “Playing a vintage system sounds better than a modern system”. Umm, now we are looking at vintage source, vintage amplification and vintage speakers.”

Do tubes sound better than a MOSFETs or BJTs?  I doubt it.  Many disagree though. But here’s the thing, getting back to the aforementioned Pioneer, this was every bit a sensation when it came out. Looking at the price tag nowadays on eBay it’s even more a sensation. At about R35k I can purchase a Behringer 12kW Class-D with speakers and drive this setup through an external DAC from my laptop. I can stream my radio station of choice.

In the good old days powerful semiconductors were just hugely expensive. If we had to compare apples with apples, pears to pears, transformers with a toroidal or EI core are a lot more expensive today, aluminum knobs and general cosmetics are a lot more expensive and of course, today mass production has caused lower costs on the semiconductors, resistors and capacitors. Rightfully so, they are also a lot more reliable.  The design criteria, except for the digitisation part remains the same.

So making like with like comparisons it’s impossible for a vintage unit to sound better than what we have today – analog vs analog. Definitely with advances in digitisation things are a lot faster and according to philes, “accurate”. But not in analog.

But along came mass production and so called budget systems.  ZAR for ZAR  modern equipment has more features and sounds better than the vintage rival budget system. Of course we have the boutique in-house builds where the wire is wrapped in cauliflower and dipped in Tobasco. Ditto, the modern ear, that belonging to the Millennial will opt in favour of the digital variety.

Loudspeakers bring us into dangerous territory. Modern speakers don’t have to be efficient because the average amplifier is a minimum of 80 to 100W per channel. It’s absolutely impossible that the older more sensitive paper-cone speakers are better than modern designs. If so then we have gone backwards. Modern speaker manufacturers have made some big advances in excursion and bookshelf speakers are evidence of this.

But yet we still compare.

Have you ever noticed how people boast about their wonderful analog equipment on You Tube.  I must admit You Tube quality can be exceptionally good but yet the recordings are often mediocre. One cannot make comparisons using You Tube – just how loud is it supposed to sound? Just how distorted must it be?  How do we feel the bass?

Unless you are prepared to pay upwards of hundreds of thousands of dollars for a sound system, digital will remain the cheapest means to reproduce a sound as accurately as the original.  Looking at the waveforms show otherwise but ears don’t see.

Audio quality is not power output based. A 20kW system may sound better at 1kW than a 1kW amplifier but true quality is a function of output versus input signals, no distortion and having lots of head room.  Loudspeaker (driver) design, crossovers and enclosures are often singled out but we don’t look at the speaker placement or room design. I heard a Keff system which sounded horrific. Studio monitors from the 60s sounded just way better. So the Keffs were sold off. The Keffs were originally wall mounted and the monitors floor mounted.

There will never be an end to this argument because there can be none.  Maybe, just maybe we need to take a budget system from 1980 and compare it to that of 2018.  I don’t believe that the 1980 model will be the winner and that’s just my thoughts. Ah, but the loudspeaker enclosures are made from “proper” wood.  Getting back to the loudspeakers again and not the amplifier.

And please remove all that digital crap out of the 2018 model before you do the test.

In conclusion some things we need to look at:

If just the above has not improved over the last 20 years then we have moved backwards.

Wooden enclosures and solid builds are another thing.

History of DIY Hi-Fi in the UK

This comparison is and will always be a means to invite debate and is as old as the hills. I find myself heading to chip amps when the going gets tough and with a well thought out power supply layout, tried and tested (pre-purchased) PCBs and with high quality elect. capacitors these amps are hard to beat.

No, power means nothing – real quality is at low powers. I have yet to find a switching amplifier which sounds great at low listening levels but they are getting better.

Build your own speaker boxes with quality drivers and crossovers and they’ll be world beaters.

Nothing sounds better to my ear than my own brewed gear.

Ziggy, interesting that you have the perception about IC amps but yet under further reading Select45 RPM has the reverse belief. I must admit though that a lot of what I have read on their pages (and it’s a huge amount) doesn’t always gel with that written by the high end audio community and engineering circles although it makes interesting reading.

Good to bring this controversy into debate. Are late 60s amps better than modern releases? 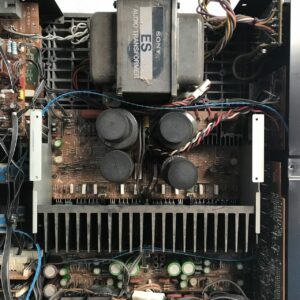