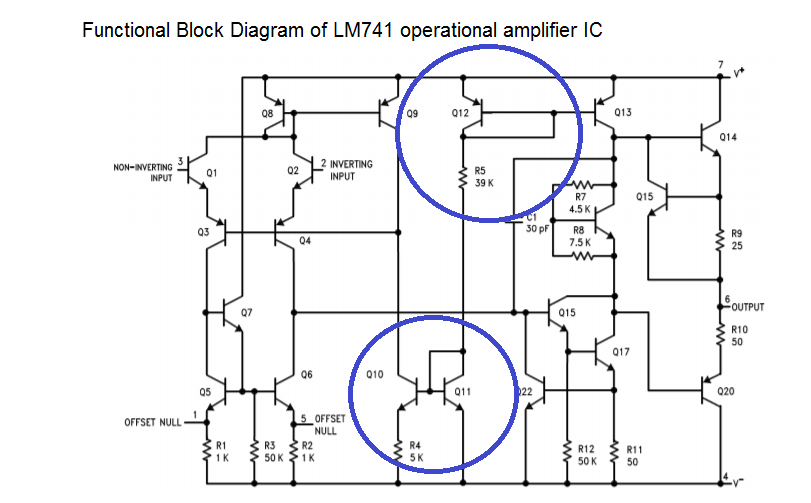 A quick glimpse into the lives of differential amplifiers and current mirrors.

Here again we bring out the tried and trusted LM741.

I doubt there is anyone in the electronics field that hasn’t worked with or come across one or more of the most popular op-amps of all time, the LM741.  We peer inside schematic 1 and lo and behold, differential amplifiers and current mirrors. Q9 and Q10 are the current source, Q10 and Q11 the current sink.

The problem with current mirrors I have discovered is that although they have been used since the beginning of time our panel of experts have a hard time explaining how they work.

The above circuit shows two NPN transistors connected Base to Base and Emitter to Emitter, Q1 has Base connected directly to it’s own Collector.

As VR1 is adjusted to allow current through Q1 (forward biasing Vbe to on), the Vbe of Q2 is also pushed up the same level – current of the same magnitude as through VR1 is seen through R1 as long as the two transistors are of exactly the same specification.

Some things to know:

If in schematic. 2 VR1 is known as the bias resistor and the resistor R1 is known as the collector load of Q2 and is equal to the value setting of VR1 one can determine through α = ß/( ß+1) that the currents through both collector currents would be the same if the junction temperatures are the same.  Current mirrors, whether sourcing or sinking and differential pairs are often kept in the same package.

But let’s not faff around the bush, let’s move on to something we can sink our teeth into.  How about some real live ammo?

Schematic 3 is one of the most common audio circuits known to man.  It has a differential input Q1 and Q2, Q1 collector feeding Q3 which drives the output transistors Q4 and Q5. D1 and D2 apply Vbe bias to Q4 and Q5.

Q1 and Q2 form the differential amplifier which sets the amplifier overall gain plus acts as a voltage to current trans-conductance stage. Q3 is the voltage amplifier stage (VAS).  Q4 and Q5 have a gain of 1 and are used to drive the low impedance load without affecting Q3.  C3 is used to stop oscillation, determines high-frequency cut-off and linearises the output stage.

Here we have current mirror Q1 and Q2 – which increases gain substantially, an active load Q5 for Q6 collector which also increases voltage gain and current drive to the Darlington transistors Q8, Q9 and Q7, Q10.  Feedback is the same as the previous circuit with R3 and R4.  C3  applies feedback, HF roll-off and prevents oscillation in the drive/output stage.

Most DIYers have a rough design which they fine tune on breadboard and when one looks at the very high end of audio, much emphasis is placed on reducing distortion in the VAS stages and overcoming the output non-linearity. 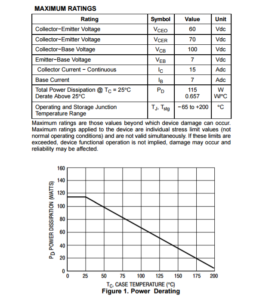