The circuit shown is that of quite an interesting design.  We had this as one of the circuits in our column “Zany Audio Circuits”  in Parts-Ring, our sister-web site and thought it may be a worthwhile repeat.

Paul Kemble also posted a write-up on this amplifier.   Q8 and Q9 form an astable (free-running) oscillator set to about 30kHz.  The output stage has no form of forward biasing which makes it definitely very susceptible to cross-over distortion.  Bias could be a typical true Class B or here Class C (biased to beyond cut-off through D1).  The audio signal is superimposed on to the 30kHz square wave at the base of Q7 which acts as a phase splitter driving the output stage in anti-phase to each other, which in turn has a 12-0-12V transformer connected to the emitters. This acts as a back EMF generator forcing a higher voltage across the loudspeaker.

Crossover distortion is minimised by the 30kHz drive at the bases of the driver and output stages.

Interesting circuit which should see much more experimentation.  Although not a fidelity amplifier of sorts at higher outputs it did out perform the 20W bridged car amps of the day. And yes I did build one and yes it was used once at a Bachelor’s down in the Strand when I was still a student. 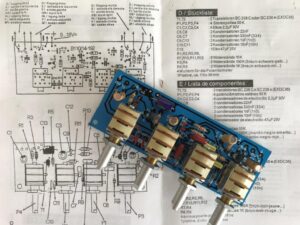