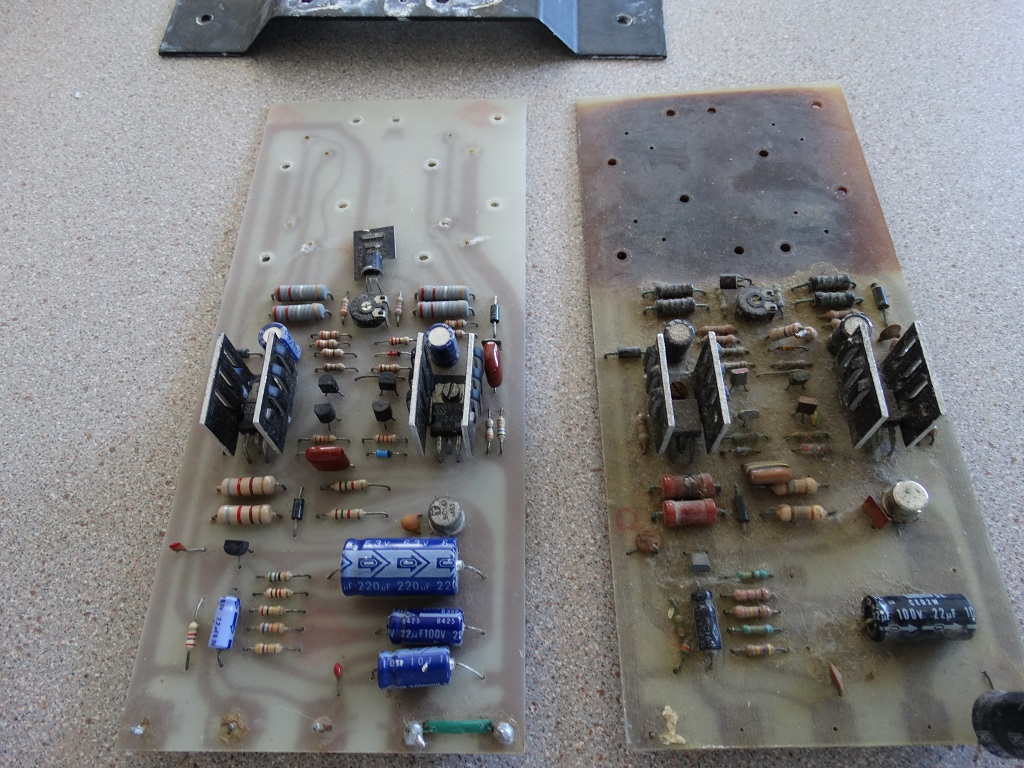 Pink Floyd and Electric Light Orchestra, music enhanced by the control of light.  What is great powerful music without a visual experience.  Not Ozzy Osbourne biting a bat or dove’s head off of course but something more appealing, sound to light, chasing, strobing and laser. Of course it’s every young inventor’s dream to build their own dazzling light show but where to begin?

Sound or audio engineering is not just a profession but an art….. exactly the same applies to an engineer who spends his life building top quality audio amplifiers.

Audio amplification is split into two parts (1) the voltage amplifier or pre-amp. This amplifier has a number of pre-requisites:  being able to amplify a tiny signal like that from a microphone or turntable (with RIAA equalisation),  being able to boost the bass or treble or equalise the signal for different room parameters (stage, hall etc) and (2) the power amplifier, which takes this signal and amplifies it further to feed a loudspeaker.  All pretty simple, right?

Professional power amplifiers should be able to drive a loudspeaker for the duration of an event without needing extra cooling or having the power supply fail.  Strangely enough they often cost less than a consumer grade amplifier.

Often the pre-amplifier is an attenuator. The signal from most CD players can drive a power amplifier without extra boost needed and the less components needed in the circuit to get to this level is better right? Right.  A good attenuator can cost more than a voltage amplifier.

But just what is an audio amplifier?

An audio amplifier is made up of many stages, each stage amplifying a lit bit of the signal until the output becomes audible through a loudspeaker.  The radio tube has a very high output impedance and to drive the loudspeaker we do need an output matching transformer called the output transformer, often the reason why audio enthusiasts like the tube for it’s sonic “ability”. Bipolars and MOSFET (Metal Oxide Semiconductor Field Effect Transistor) devices can drive the loudspeaker directly.  The loudspeaker is a very low impedance device – it not only needs a large voltage swing to hear anything but it needs a lot of current.  Power of course is equal to Current x Voltage.  So a power amplifier is then also a current and voltage amplifier,  from low voltage high input impedance (low current) to high voltage low output impedance (high current).

The schematic above is a very common design and very popular in the 1970s.  I have added this here because of a few factors:  The design is that of a quasi-complimentary output stage audio amplifier – the output transistors are both NPN.  (the output transistors are both the same and not complimentary, PNP and NPN). The supply rail is also a single and not split which is common in today’s amplifiers – because it is a single rail supply and the DC voltage at the junction of the two output NPN transistors is set to mid supply voltage a capacitor must be used to isolate the supply voltage from the loudspeaker.  For anyone building their first amplifier it is always important to add this capacitor whether split or singly supply as a protector.

This amplifier is also known as a class B audio topology – one where the Q1 amplifies the upper part of the waveform and Q2, the lower.  But how does it do that?

Both transistors switch on with a positive going waveform. (NPN transistors are positively biased to draw current, PNP’s, negatively biased.  That means the transistor is “on” or drawing current when the Base in respect to Emitter voltage is either + (NPN) or – (PNP), or rather more accurately when the Base to Emitter voltage approaches a semiconductor switch on voltage of about 0.7V.  Read up on about semiconductor diodes.

In the case of the above an NPN transistor (Q3) drives the output transistor (Q1) when it’s base voltage is positively driven and likewise PNP (Q4) drives Q2 when the base is negatively driven. This causes the junction of the two output transistors to swing above and below +25V (the midrail or output static setting).  Remember that the output DC is isolated from the load through capacitor C1 which is a coupling capacitor and DC blocker.

Q6 and Q7 are biased class A which means they amplify the entire signal and also play a role in voltage amplification. Q6 drives the complimentary driver stage and is known as a pre-driver.

C7 is a coupling capacitor which also serves as a DC blocker.

Read up on about Bootstrapping and Capacitive reactance.

These were very popular modules in South Africa through the 1970s and yes, are even in use today.

Quasi complimentary outputs have fallen out of favour in lieu of complimentary stages, like the 2N3055 and 2N2955 or the high powered MJ15003 and MJ15004.  Designers agree to disagree about the merits of QC topology although some of the best amplifiers every built used NPN transistors in the output stage.  The Phase Linear 400 and 700W amplifiers are a case in point.  Both still very much in demand today.   But…

The biggest drawback I can think of when it comes to power amplifiers will be split-rail versus single rail and that loudspeaker coupling capacitor.  I have personally experienced a test where I could not distinguish whether there was an output capacitor in the final stage or not.   This was a very carefully designed amplifier of course. The Autona modules were extensively used in “disco” circles and were almost always used at full volume so quality was not of importance.

The featured image shows a very blackened board where the output transistors were mounted. I still have a few of these boards lying around – mostly driving 4 Ohm loads without adequate heatsinking. Although these modules had temperature compensation and current limiting they were not very robust if the aluminium heatsink supplied was not adequately mounted on to an external heatsink i.e. bolted, with thermal grease.

Analog Ian also has numerous columns on chipamps (Gain Clone amplifiers) which covers this aspect to audio power amplifiers and make wonderful amplifiers to build over a week-end.  Mostly using very few external components they have become popular because of their reproduction quality versus pricing,  ease of construction and compactness.

To learn more about chip amplifiers do have a look at the manufacturer tech bulletins and application notes.

Chapter One:  Beginning the Sequence

A Career in Electronics – Beginning the Sequence – Analog Ian