Years back some of the most brilliant scientific minds got together and decided that it was impossible to split the atom. Of course we know what happened in Nevada, Hiroshima, Nagasaki and Bikini Atoll which put paid to that theory.

Likewise in audio circles it was decided that although class-D was feasible, the quality would remain so bad that it would or could only remain a classroom project. Some things have changed since that argument.

Whilst looking around for circuits and projects on the internet which would satisfy my class D curiosity bug I came across a lot of negativity, especially from the audiophile community. Their argument would be that Class A (or SET) is the closest one would come to real quality, the class B approach (actually class AB) is not too bad except for the inherent crossover switching noise and then all things considered SET and then tube push-pull was the only way to go. Class D was not even a consideration.

To prove them all wrong and not wanting to wait for confirmation by doing the intelligent and sane thing, a listening test, I purchased the Behringer 6000 amplifier (without DSP).  I was not disappointed. I do believe that class D amplifiers do not exhibit the performance of class A moving up the frequency spectrum. In my case the higher notes seemed to be lacking somewhat compared to a Proton 1150 which I had laying about.  Driving Peavey 15″ bins with separate tops improved matters. But the powerful gut wrenching bass is what appeals to me and to many DJs out there.  Was  it a good purchase? Bang for buck you won’t get better. Many people use them in their home theatre systems.  Most probably they all live in small apartments as well.

Class D amplifier design and builds are not for the weak though.  Building from a schematic is one thing, designing and constructing a working board another thing entirely.  Although home tinkerers have used 555 timer ICs for sawtooth generation getting  poor to mediocre results, moving up a notch becomes a nightmare.  For most though, fighting with switching noise, EMI, killing MOS devices because of trigger and timing issues and distortion  is a reality.  But kudos to those that have persevered and for especially the DIYer this is a huge feather in one’s cap.

From a marketing perspective though, electronic engineers have moved away from the analogue and linear realm into ultra high speed switching (for audio), digital, DACs, supply PWM regulation and of course class D. Thirty years ago 1/2 and H-Bridge topology was a luxury, an expensive entrance into motor drives, switching supplies and even then, switching amplifiers. Now it’s as commonplace as a barbecue on a Sunday afternoon.

A quick word on modulation:  PWM versus ΔΣ (delta-sigma)

There are many that prefer the delta-sigma (or sigma-delta) modulation process over pulse width modulation but truth be told, the PWM platform is far older and more mature. Another topic, for another day of course, is that fundamentally there should be no difference in audio quality using either topology.

I liked the design in All About Circuits where the author deliberately uses PWM over delta-sigma. The Hi-Lo side driver chip used is the exceptional IR2110 from International Rectifier.  Stage by stage explanation.

Delta Sigma is the process commonly used in ADC or DACs, in class-D we use this process to break down an analog signal into pulses, commonly termed Pulse Frequency Modulation.

Companies such as Texas Instruments have been designing Class D power stages for many years now. They have got it right but they keep on improving. Less cooling, lighter power supplies and now very cost effective chips for  the mass manufacturing of home theatre and stereo systems.  I would be lying if I said that Class D is better than class AB, because theoretically it shouldn’t be by following the straight line rule. But it has unbeatable advantages, cost, space and power efficiency valuable to cell phone and hearing aid technology.   Some say the clarity is not as good as the older and more inefficient systems but in a country like South Africa where the lack of manufacture is a disgrace it certainly keeps shipping costs down. (weight).

The beauty about Class D is that we now have cheap good quality audio chips, using a minimal of components we have a small desktop amplifier capable of lighting up a handful of loudspeakers but the con is sadly the power supply. PC switching supplies have become very reliable and even a good quality properly rated 400W device costs less than R500.  Off the shelf 35V-0-35V supplies in the region of 400W cost 3 to 4 times this, leading us back to toroidals and EI transformers.  Although there are companies in South Africa designing and building SMPS, their expertise usually lends itself to units in the kiloWatt ranges, more margin and possibly bigger demand.  For us to grab all the advantages of class D we need SMPS,  cheaper SMPS. Reverse engineering PC supplies is an alternative but only for the more experienced.

Which brings us on to the TPA3255 Class-D Pure-Path chip, the David of Goliath fame, the mammoth power IC from Texas Instruments. Claiming 300W per channel stereo and 600W  mono parallel bridge tied at 10% THD+N and at only about $10 each this is unbeatable value. 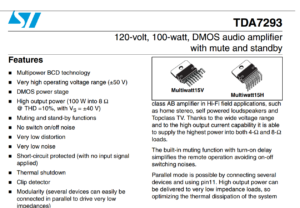