Although I am not big on rhythm composers and generators the articles covering electronic music synthesis would be totally irrelevant without at least a few lines on the TR-808 and a few other “drum machines” which come from the analogue era of the 60s to 80s and dare I say, even today.

Ikutaro Kakehash founded Roland after huge success with his pioneering company, ACE Electronics. Some of his better machines using the then cutting edge technology were passed on to Roland, one machine being the TR-77 Rhythm 77.

The early 70s brought on the TR series (Transistor Rhythm) and then later, the CR where the CR-78 became the first machine which utilised integrated circuits (this I believe was the first of it’s kind).  The CR-78 was cloned recently by the French company Cyclone Analogic, named the TT-78. Although the CR-68 was limited in functionality unlike the 78 with programmable memory it was popular at the time due to it’s lower costing. The CR-800 is another classic, more known for it’s rarity however. The unit came complete with amplifier and floor mounting loudspeaker.  Great bit of kit described here with images.  Personally, I have never seen one of these units in South Africa.

The Dr-55 became a model which was most famed for stepped rhythm programmability. It was simple, it was cheap and as students we all tried to emulate the circuits as electronic students.

This conundrum (pun intentional) of an electronic drum generator was supposedly one of Roland’s biggest flops, an all analogue synthesiser which was designed to compete with the digital sampling Linn LM1. Although the TR-808 was marketed at nearly quarter the price of the LM1 and was initially scoffed at, it was used on more labels than any other machine in history.  One needs to remember of course that our most talented musicians and sound engineers are a pool of creativity and the only limitation to any synthesiser is really only the user. Being a highly affordable and analogue drum machine lent itself perfectly to “bending the rules”.

Although Roland continued to bring out analogue machines until the mid-80s, drum synth became hugely popular on the hybrid and digital platforms, memory storage and programmability being a huge plus.

BOSS is a division of Roland and amongst the many achievements it can boast of, is also the proud manufacturer of some of the world’s best and unique stomp boxes,  guitar pedals and synthesisers.

Although the advances in digital technology has reduced pricing of all-in-one packages it’s certainly no surprise that most guitarists, hobbyists and professionals alike, veer towards their favourite.  And this, more often than not would be the analogue pedal, the one that screams and shouts, gives blisters and tears skin off the otic canal.  Flangers, distortion, phasers,  echo, delay, chorus,  screamers, overdrive, fuzz, modulators, tremelo, you name it, they have it.

My favourite Two (out of Ten)

OK, let’s be realistic.  Certain styles of music lends itself to guitar synth but not all. Here we single out the player and his or her style. I don’t know what a Stratocaster will sound like played clean but maybe I don’t want to. Hendrix was a great user of Wah and Fuzz.  In my mind he could have used any effects pedal and one would know it was Hendrix.  A very under-rated guitarist is Mark Knopfler.  I think he was positioned at number 25 in Rolling Stone mag a few years back.  He may just be genius – I give him full credit.  Orange Whip Compressor, Cry Baby, Volume make up his distinct sound. I don’t think any pedal will bring out his distinct sound – he was (is) never a show off.

Guitar pedals are not full of magic. In our previous articles on music synths we touched base on some of the tricks used.  All the effects used by all the musicians in one box is the big advantage of digital.  Multi-FX, used in the BOSS ME-80. At a touch over R5 000.00 this is not a bad buy. Of course there’s literally hundreds of multi-fx pedals being sold these days so one can take their pick.

This subject to be continued – a base for effects in guitar, circuit description and how it works.

In 2004, John Wood stood outside Hollywood’s Amoeba Records, selling bumper stickers emblazoned with the slogan: “Drum machines have no soul”. 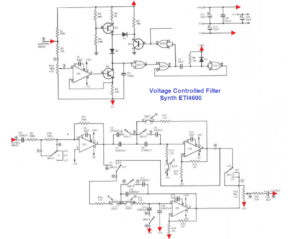 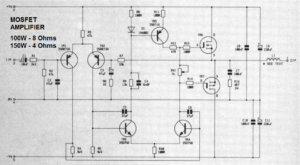 Next post MOSFET amplifiers – the quick and the dead