South African Music – our musicians, not really but nearly!

Manfred Mann, rather then Manfred Sepse Lubowitz, was born in South Africa in 1940.  I would hasten to add that we all like to see him as a South African,  like Elon Musc, but truth be told much is driven by influences within the musician’s host country.

Famous as a musician first and foremost, then for the hits “Do Wah Diddy Diddy”, “Pretty Flamingo” and “Mighty Quinn”, then Manfred Mann and now Manfred Mann’s Earth Band was and still is an inspiration to many song-writers.

I have added Manfred Mann to our “SA Music” articles page because he is after all native South African, he did leave South Africa most probably due to political pressures at the time and the article that most gave insight into the Mann we know comes from an interview with Andrew Brel of Keyboard Magazine in 1993.

Oh yes, nearly forgot – Manfred Mann is known for his solo acts on the Minimoog synthesiser. Let that not be forgotten. Please read up on the series based on synth modules used in analogue synthesisers.

And of course, this could not be complete without the famous Bob Dylan track, “Quinn the Eskimo (Mighty Quinn)”

And next, moving on to our top export, “Mchunu’s Bull”. (Coming Up)

[…] next up, the famous Keyboard Magazine interview with Manfred Mann, the Mighty Quin (the […] 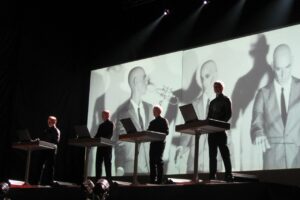