It’s not an unknown secret that ring-bridge modulation was used extensively in early music synthesisers but where we need to tread carefully when explaining this fancy buzzword to our musical friends is that the ring-bridge modulation circuit firstly became popular in SSB transmitters for suppressing the carrier in double sideband mode.

We’ll try not confuse anyone here, most of all myself but from what I recollect at radio school in 1977 was that the ring-bridge or balanced modulator was originally known as a Cowan modulator after the inventor and AT&T engineer Frank Cowan.

Note:  The technical aspects to ring-bridge modulation and demodulation is complicated and of higher order maths.  Studying radio this becomes useful or rather vital to know but not here.  We do lead on to the uses of this circuit in audio devices later so keep your hat on.

The SSB Transmitter: Making use of the Ring Bridge Mixer

The output of the circuit above will be the sum and difference sidebands with no carrier.  In early technology where SSB was the order of the day we then had a sideband filter which would remove either the lower (LSB) or upper (USB) sideband which had huge benefits over the old amplitude modulated transmitters.  A much lower modulation power was also required compared to the kWs used conventionally.

At the receiver end, if one used a conventional AM receiver you would not be able to detect any audio unless the receiver had a Beat Frequency Oscillator (BFO) or some form of carrier re-insertion.  This was not the only thing though.  The receiver also had to have a very fast acting AGC or Automatic Gain Control to prevent the output amplitude from surging, possibly the best explanation I can give right now.

SSB receivers had to be fine tuned and when off tune the human voice used to come across as metallic, monkey chatter and at worst totally unintelligible. SSB had huge range advanges at very little power compared to the older double sideband full carrier transmitters. Even in the 70s the transmitters were also quite often digitally controlled which meant high stability frequency synthesisers using a temperature controlled crystal oven or PLL. (Phase locked loop instead of the older crystal selectors).

SSB transmitters running in A3J mode or SSB suppressed carrier used linear amplifiers running up to 3kW input in maritime transmitters (1.5kW PEP). It was not unusual for communication to take place from Japanese waters to Cape Town Radio (ZSC) even at 400W which came across clearer than the juggernaught SABC transmitters, if they were to be heard at that time of the day on supposed select frequencies for the Asian network.

To be continued:  Ring Bridge in Audio Synthesisers

[…] a previous article we cover ring-bridge modulation in SSB transmitters to get DSB-SC (double sideband suppressed carrier). Of course not to be […]

Previous post Inside the The ART Digital MPA II 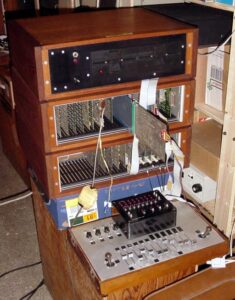 Next post FM Receivers – yesterday and now in South Africa

Some of the best known oscillators - for the beginner For those interested in electronic circuits it's almost impossible to...

Home Theatre AVR161S 5.1 harman/kardon Being pretty frugal when it comes to buying audio equipment I felt it time to...

This website uses cookies to improve your experience while you navigate through the website. Out of these, the cookies that are categorized as necessary are stored on your browser as they are essential for the working of basic functionalities of the website. We also use third-party cookies that help us analyze and understand how you use this website. These cookies will be stored in your browser only with your consent. You also have the option to opt-out of these cookies. But opting out of some of these cookies may affect your browsing experience.
Necessary Always Enabled
Necessary cookies are absolutely essential for the website to function properly. These cookies ensure basic functionalities and security features of the website, anonymously.
Functional
Functional cookies help to perform certain functionalities like sharing the content of the website on social media platforms, collect feedbacks, and other third-party features.
Performance
Performance cookies are used to understand and analyze the key performance indexes of the website which helps in delivering a better user experience for the visitors.
Analytics
Analytical cookies are used to understand how visitors interact with the website. These cookies help provide information on metrics the number of visitors, bounce rate, traffic source, etc.
Advertisement
Advertisement cookies are used to provide visitors with relevant ads and marketing campaigns. These cookies track visitors across websites and collect information to provide customized ads.
Others
Other uncategorized cookies are those that are being analyzed and have not been classified into a category as yet.
SAVE & ACCEPT
wpDiscuz
5
0
Would love your thoughts, please comment.x
()
x
| Reply