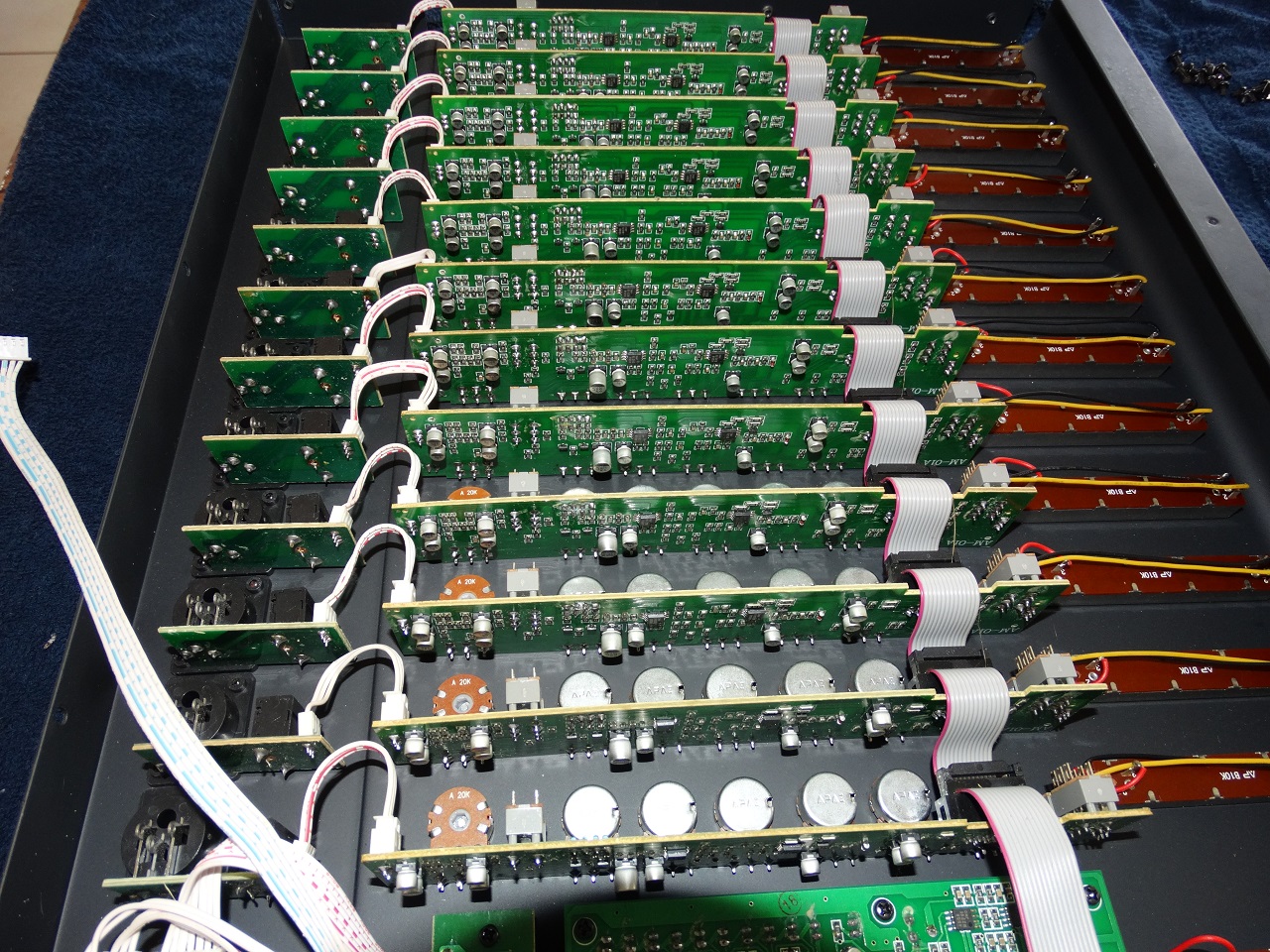 Teardown of a Dixon PM121USB mixer

A forum user, a musician and lead in a band has a broken active mixer and a small budget. He purchased the Dixon 8 channel mixer for his next evening’s performance and was surprised at the quality of this budget mixer. Of course we had to have the gunslingers ripping the gear off and in spite of all the negative commentary an audio engineer (a real audio engineer) qualified what the musician was saying by giving technical advice, positive criticism and wished him well with his new gear.  This is what forums should be about, not spiteful comments – a musician is very protective over whatever he or she may be using.  In this article we will look inside the Dixon PM121USB active mixer, the one sold by Crash Crusaders currently for about R 4 299.00

Firstly, there are many parameters governing the quality of a mixer. Many die-hards look at the build quality first as they are sensitive to being thrown around, something roadies are prone to do. In a studio mixer the user may want ultra-quiet microphone preamplifiers which add no colour, some like to add equalisation whilst others don’t care as long as there is an output which is pleasing to their ears. And we have the USB, Firewire and Thunderbolt connectors and the digital mixer – all in good time. This is about a basic analogue mixer. In this case a powered mixer. A rebadged Chinese workhorse.

The Dixon active mixer has 12 real microphone and line inputs. There is a marketing ploy where advertisers list all the preamplifiers, even the tape or inserts.

Power Amplifer (the PM121USB is a powered audio mixer)

The Dixon mixer power amplifier supply rails sit at about +60/-60V . I did not measure this. The transformer is rated at 42-0-42 and looks to be around 500VA.   Once rectified and filtered = 42*1.414.  This should be sufficient for about 200W into 8 Ohms. Into 4 Ohms, I doubt 450W at all – but I do think the retailers state about 300W RMS, which could well be within the ratings of the transformer and the transistors (the table below gives these Toshiba transistor spec at Absolute Maximum Ratings (Ta = 25°C).

The power amplifier uses 2 x 4700uFd electrolytics for smoothing which is something I would possibly be improving.

The preamplifiers – the Mixer with amplifier removed.

Project Mixer – You can’t build for this price. You can modify easily as well.

The one thing I really like about this mixer cabinet is the space inside which lends itself to changes. The mixer has modules which are easily modified (pity about the soldered chips though which doesn’t encourage swapping).  The mixer only has a stereo bus which separates it from the big boys but using the back of the cabinet which has a lot of empty space one could add more inserts and possibly bus grouping using rotary controls.  I will be doing this in an upcoming project.  One thing the mixer does need are extra buffers to feed extra power amplifiers. The project may mean removal of the power amplifier and redesign of the power supply to feed other op amps. Re-bussing may mean groupings of 5 input, 4 input and 3 with one insert per group plus the main one, marked as return.  The price of these units lends itself to this because they aren’t meant to break the bank – if one is careful and caters for a specific need I would say that these mixers cannot be beaten for value.

The audio gurus don’t like the 4558 chip because of their age and poor sonic quality but it has it’s merits, pricing and low current draw. Because low current draw isn’t really a problem here the first thing worth upgrading would be these ICs.  The recommendation would be the 5532/5534/RC4560 or OPA2134 or 2604.  The one thing that must be mentioned is the current draw – again. This mixer uses more than 24 of these devices which in total is a mere 0.5A~0.8A, exchanging them you will be looking at possibly about 2A in total.  Voltage regulation needs to be beefed up and make sure you have enough time on your hands. But, it may well be worth it. From my side I didn’t think these ICs were of “poor” quality for an entry level function but it doesn’t compare with my 18i20.  For live performance these ICs are more than OK although they are now very long in the tooth.  The 4558 is ideal for tube screaming pedals (Ibanez with JRC4558D chips).

The weak side of this mixer/amplifier is the amplifier cooling / heatsinking and to be pedantic, the 4558 chip which is dated. For the casual user, a really great 12 channel mixer which cannot be beaten by price and of course, the mere fact that they are so easily modified.

Project:  Look out for an upcoming article showing mods made to this unit: bus grouping, additional inserts, line and USB 2 outs. Can this mixer be controlled externally? At a huge cost of course but it can be done.  Then there is the big problem of noise injection, something which we definitely do not want. Being of modular design and having ample space inside makes this mixer one of the best on the market for the avid tinkerer.

The PM121USB used in this article was purchased from Cash Crusaders as a used model, three years back for R 2 500.00.  Often seen on Gumtree sold way beyond their realistic value and in very shitty state. No knobs – don’t buy because it has been hammered. Electronic equipment should be looked after, no matter where it’s used. Because this was not an expensive product doesn’t make it crap. Hopefully as this article suggests it’s real value for money and for the DIYer, a gem.

Specifications (click to get bigger image. Apologies for poor quality)

Hey and nice to see this post. Although I veer away from entry level stuff, especially Dixon, I know it’s a very popular brand in South Africa. I have one of these mixers which I use for family gatherings but one of the channels gone bust. Can you give me some indicators. I don’t have the money to send in for a repair, someone told me I am looking at about R1000.00 to service this unit and fix the channel that is faulty. Thank you for any assistance.

@HiFi01
Was this a mixer channel or amp? You can swap the mixer channels to see whether it’s the preamp or not. Taking a shot I’d say you are referring to the amp. The power amp is a different story. Check sockets, fuses, speaker protection relay clicks in and speaker first. The power amp has 4 transistors in the output stage per channel. Find Collector and Emitter of the NPN and the PNP. Read voltages across these or at the inductance (in series with speaker) – this must be 1/2 supply voltage. If these are OK connect input to RCA sockets if you haven’t tried this yet as this is the shortest route to the amp. If voltages across either CE on PNP or NPN is low you will need to remove the board and check a) burnt tracks b) remove transistors including drivers and check for shorts. If the speaker relay is not pulling in usually the amp is at fault and will have DC at the output. If this only has one relay (which it appears to have) with contacts for each speaker then I would guess the amplifier is fine. Mixers can be finicky if not cared for where the sliders don’t make contact – here you may need to bridge the inputs to ensure there is drive to the amp (one amp is working OK?). I doubt this is seriously sophisticated amplifier and hopefully I have given you a some useful ideas. Don’t substitute transistors. Look, smell and feel. Be careful of the voltages – this is a 100V supply and will cause damage to you. There’s many ways to skin this cat. If you are not sure read, read and do more reading. Bets of luck. (oh yes, does the LEDs for both channels work? On a higher level I’d say that there is an interconnect problem between preamp and power stage IF the amplifier uses only one relay for switching outputs to both loudspeaker outputs which by the image appears to be).

Just for clarity, the relay has only one energising coil driven by two DC detectors for the two channels. If one amplifier goes faulty it disconnects (or shorts) the output to prevent speaker damage. Because one channel is working it doesn’t point to the amplifier being faulty. I hope this all makes sense.

Thanks for the reply Lightwell. Sorry, yes the power amplifier was only playing on one channel. I followed your advice and connected what looked like the two inputs together and both channels are 100%. I am going to leave it like that until I have the time to troubleshoot some more but will keep you posted. Thanks. C.A.

This website uses cookies to improve your experience while you navigate through the website. Out of these, the cookies that are categorized as necessary are stored on your browser as they are essential for the working of basic functionalities of the website. We also use third-party cookies that help us analyze and understand how you use this website. These cookies will be stored in your browser only with your consent. You also have the option to opt-out of these cookies. But opting out of some of these cookies may affect your browsing experience.
Necessary Always Enabled
Necessary cookies are absolutely essential for the website to function properly. These cookies ensure basic functionalities and security features of the website, anonymously.
Functional
Functional cookies help to perform certain functionalities like sharing the content of the website on social media platforms, collect feedbacks, and other third-party features.
Performance
Performance cookies are used to understand and analyze the key performance indexes of the website which helps in delivering a better user experience for the visitors.
Analytics
Analytical cookies are used to understand how visitors interact with the website. These cookies help provide information on metrics the number of visitors, bounce rate, traffic source, etc.
Advertisement
Advertisement cookies are used to provide visitors with relevant ads and marketing campaigns. These cookies track visitors across websites and collect information to provide customized ads.
Others
Other uncategorized cookies are those that are being analyzed and have not been classified into a category as yet.
SAVE & ACCEPT
wpDiscuz
4
0
Would love your thoughts, please comment.x
()
x
| Reply