And on that controversial note of starved anode designs

The starved anode design has become fairly popular amongst guitarists because first and foremost these are highly affordable tube preamplifiers and secondly, well because they use tubes of course.

Behringer has brought out the Ultragain Mic-100 which is a cost effective instrument and microphone preamplifier. Trying to *purchase one in South Africa recently was useless, suppliers are always out of stock.  OK, I wanted two because I would have been modifying them for line preamplifiers at 250V anode supply.

The starve anode topology has been around since the beginning of time and is therefore not some new gimmick.  Read more about this on our sister website here.  In the good old days we had an accumulator pack for radio receivers and although looking back this was  archaic it did work. And work well. Better than the Note 7 at least.

Now we have armchair critics complaining about these starved anode and guitar effects preamplifiers and to be blunt, “if you don’t know what you are talking about then shut up”.  The internet is full of Behringer harbingers of doom that I wonder how they (the company) manage to make profits. A quick word on this as I am sure we are all tired of the same crusty bullshit:  Behringer did make good gear when it was manufactured in Germany. There were teething problems when they moved their manufacturing to China. They no longer have these problems or at least there is control. They do manufacture certain of their products cheaply to remain competitive.  You will pay more for equipment to be thrashed around but electronic equipment was never designed to be thrown around. Ditto to every other single company which moved their manufacturing to China. I can mention at least ten.

The preamplifier below is not necessarily a starved anode design. In fact it is not, it can be switched to starved anode as a mode (either high plate or low plate).

The reason why we are covering this is because in at least two forums some expert or other warns potential buyers off this design because of the plate voltage.

What is the Art Pro like considering I have never used the Mic-100.  In a comparison between the unit I have which is the digital version and the Focusrite 18i20 there is a distinctive “warmth” to the tone of the tube pre-amp, more so at full plate voltage with the same program material at line level. The preamplifier has variable input impedance for mic which some artists like.  From a studio perspective many home enthusiasts stick to either a full solid state design or tube.  Different strokes for different folks.

*The Mic-100 used to retail for under R800.00 at one stage. Our problem obviously is ROE.  The Mic-100 can be modified fairly simply for turntable use by adding RIAA IC amplification before the 12AX7/ECC83 tube and modding the supply rails.  Sure, there are some wishing to rather use an EF86 voltage amplifier before the dual triode ECC83 but in this case a very low noise IC costs R10.00 as opposed to the R250.00 for a tube which is fairly difficult to purchase locally.

As far as I am concerned the starve anode design does it for us. 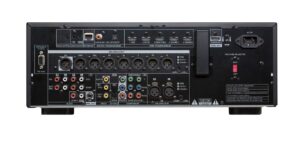 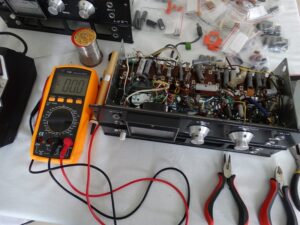 What is the difference between Line and Microphone Inputs This is a question often asked in the forums, not necessarily...