Doing research on the web it’s not surprising to find the many thousands of requests covering circuits which utilise the starved plate technique. As mentioned previously, I am not an advocate of this approach but it does work well – as long as you do follow the tried and practiced route, meaning using circuits which do what they are supposed to do and designed by engineers whom know tube technology.

In line with our website offering, we try to bring you really great weblinks of companies that supply kits, parts or accessories. The logo below this is of Paia Corporation, based in Texas and founded in 1959! This is just such a company.

If you really enjoy intuitive websites Paia is exceptional. Although we are by no means affiliate to this company they bring a big chunk of knowledge to the musician and DIYers corner – for the thousands of like minded individuals who enjoy building their own gear this gem of a website is one you must bookmark. From my own experience you will not be able to source cheaper and have the same result as purchasing the kit. There are also lots of forums where DIYers have purchased the kit and applied modifications either for customisation or to improve (kits cost money, manufacturers try to keep their and your costs down).

I recently built a copycat of the PAIA 9407K (see here) and besides for some critical comments from possibly more subjective testers found the pre-amp did what it was supposed to do. I have not tested the Behringer MIC-100, 200 or 2200 although I am trying to get my hands on a 2200. The Behringer mic preamplifiers no doubt are based on the same circuit design and funny enough many of the reviews on “Musician’s Friend” are most encouraging. Remember that these are musicians doing the testing – it’s not an audiophile review.

The circuit in the Paia uses low noise opamps which either drive or bypass the ECC83 tube which is used as a low voltage (starved plate) voltage amplifier. Supply rail is derived from a charge pump circuit which multiplies the 15V DC to about 45V DC. I don’t think there is anything possibly unique about this amplifier except running a tube which is not designed to run at 45V to get the desired outcome. For experimenters, there is a distinctive sound – this makes it unique. Fiddling with replacement tubes in this stage, called “rolling” is a true test as to the merits of tube sound as boasted by tube followers.

There is however two other circuits which deserves some mention – one from an old Elektor magazine where the tube drives a MOSFET class A (see here) – this circuit deserves mention because it serves as a stepping stone to the experimenter. It does use higher voltages and starts running into the domain which I like, using the tube where it starts acting as a tube and not necessarily as a low gain non-linear device. The Roger Gomez Headphone Amplifier is also a hybrid (see here) but is a high quality circuit using starved plate again. This circuit uses the ECC82 or 12AU7tube. The distinct differences between the AU7 and the AX7 lies in the gain. Many tube starved plate experimenters prefer the 12AU7 for this purpose and in my mind, depending on what you opt for (Paia or Gomez) bare in mind tube gain makes a big difference. Both are complete projects and both are simple to build, baring in mind that the Paia circuit does use many more components and a higher voltage.

If you are experimenting with these circuits there are some simple rules to follow – know your limitations. Never build circuits using high voltages if you are inexperienced. The low voltage starved plate circuits here are not exhaustive, there are many similar circuits on the web – always take care when building a circuit and ensure that you have either a current limiter in circuit or a fuse. Although you may use low voltages, static electricity will damage CMOS devices. Earth your hands, do NOT take the devices from it’s protective holder until you are going to use it. Although tubes are robust they will break if dropped and if the heater voltage is exceeded. Although the current draw of preamp tubes is in the order of a hundreds of micro or a few millamperes, going over their rated value can easily strip them of their magical powers.

Non Tube Circuits and knowing your own limitation

Talking about limitations. When I was about 13 a friend of mine plugged his 3V transistor radio into the 240V mains socket. I offered to repair it.  Now that is not knowing your own limitation. 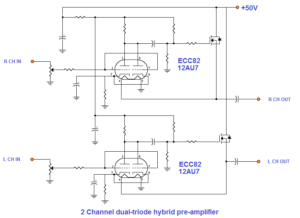