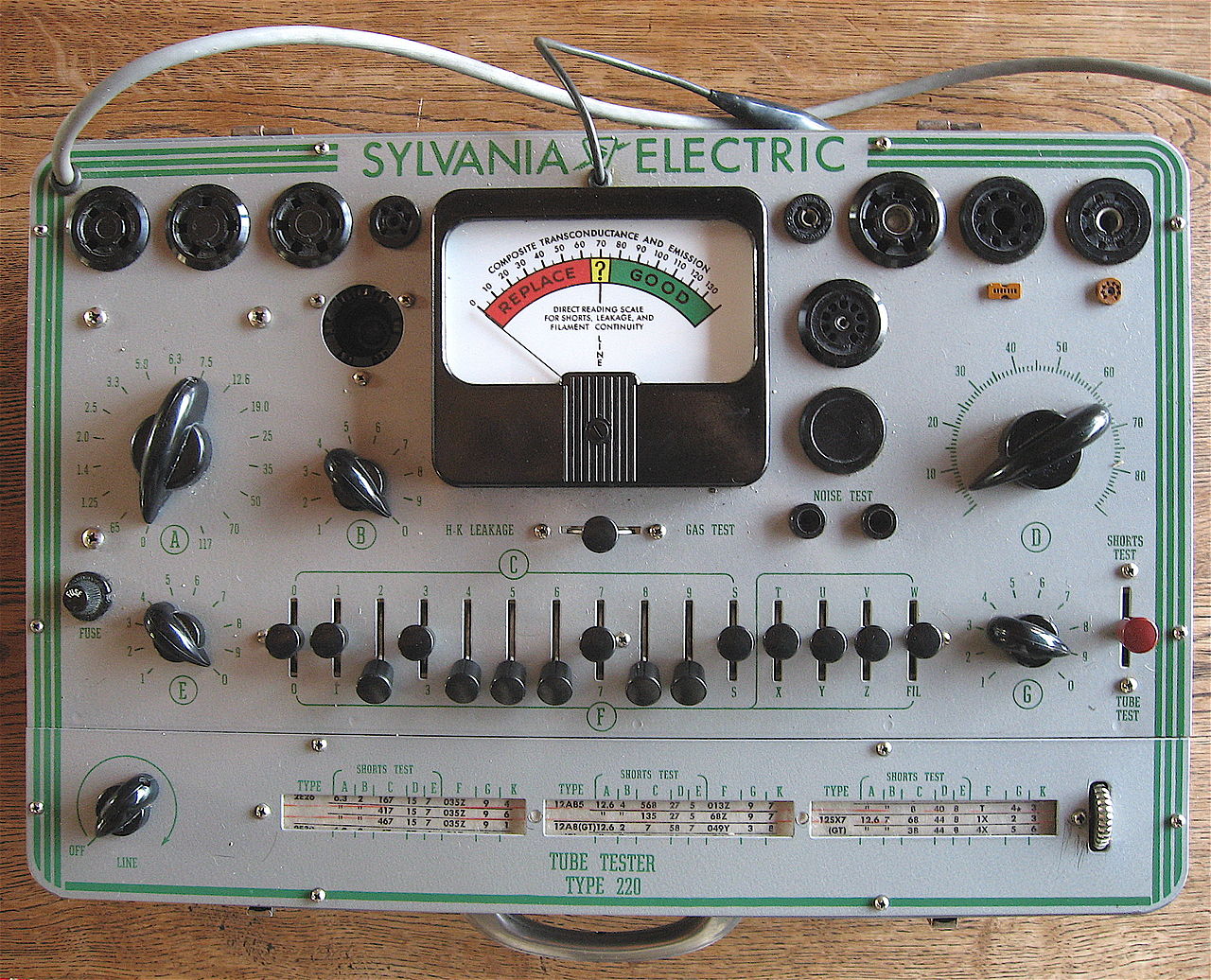 Going through the millions of audio equipment ads posted on eBay I’m surprised that China or Russia don’t start building new tube tooling equipment – it’s become quite evident that there is just no rival to the sound of vacuum tubes. From highly musical, ambient, warm, vibrant there is just no getting away from it, hype is in full flight. I tend to agree that solid state designs can sound clinical but when one thinks that a pre-amplifier can be built to a far higher spec than any tube amplifier, which will last longer and cost less then we need to really assess our priorities.

This article is not around whether a tube is better than a FET or bipolar transistor on the audio front but rather some of the difficulties posed in their design. There is a large following of Russian manufactured tubes yet the Chinese are also ‘apparently’ bringing out some very good quality tubes. When I read of owners having to change their tubes every one to two years, including pre-amp tubes, is this based on tests conducted or listening pleasure? A tube does not have an infinite life span, does not like to be knocked about and won’t last if it is run outside (over) it’s specification but is still a remarkably resilient device. Just like a transistor there is a safe operating area – my own experience is that a tube will handle overloading better than semiconductors, testament to the many protection circuits around semiconductors to prevent over-current, allow faster switching and protect from back EMF. Of course we could apply this to tubes as well, a load disconnected from a tube audio amplifier is a bad thing, excessive cathode current reduces emission faster than you can say ‘boo to a goose’ and the dreaded insect lying across socket pins causing premature failure – think roach across control and screen grid path. No, tubes can be made to last if they are used within spec. We did not change very expensive transmitter tubes every 12 months – they had very sophisticated safety mechanisms built around them. In fact think what will happen if a transmitter output stage was coupled to a mismatched antenna – this always happens when you are near the coast, caused by salt, sea-air and is even worse when you are at sea.

To bias a semiconductor to either be on or off can be done simply, possibly by the drive circuitry as in the case of switching supplies – in class C, the NPN base is held negative by a few volts, in class B, the onset of current draw, the NPN would have a voltage close to switch on and AB and A, the voltage will be higher in the positive region in relation to the emitter. So what about a tube? It is exactly the same – the control grid is usually biased negative in relation to the cathode. This is the same with triodes, tetrodes and pentodes. When we talk about Hfe in a transistor we talk about the small signal current gain of the device. When we talk about Mu in a tube, we talk about voltage gain of the device. The other term often used is Mho, the transconductance of the tube. Another term often used is Rp or plate resistance. Just as voltage, current and resistance are all inter-related, so are Mho, Mu and Rp. I always found it easier to move from tube designs to transistor designs – there are a lot of parallels but tube circuits are nearly always easier to understand. At least that is how I was taught, from tube to semiconductor. One thing that is not that apparent though is that Tubes have many criteria which affect their gain.

So we have Mu, Mho and Rp. Another important criteria is the inter-grid capacitance, called the Miller Effect, predominant in the triode.

Mu – the voltage gain of the tube

Let us now add some figures – let us hypothetically speaking finding that a 50V increase at the anode, fixed bias voltage of -5V at the control grid produces a current of 10mA at the cathode. (our anode and cathode currents are taken to be the same so Ia = 10mA). A 2V increase at grid or bias setting of -3V produces the same current at the cathode. This indicates a voltage gain of 50/2 or 25. However, the anode has an internal resistance – calculated by Ohm’s law to be a change in or Delta Rp (plate resistance) = Delta Ep (plate voltage) / Delta (plate current) = 50V/0.01 = 5kOhm.

Then, as mentioned previously, we have the Mho or transconductance of the tube, the ability to transfer electrons from cathode to anode. The easier the control grid can control this flow, the better.

Whilst resistance opposes current flow and measured in Ohms, Transconductance relates to the ease of current flow.

Transconductance is merely the voltage gain (mu) of the tube divided by the plate resistance (Pr). In this case, 25/5000 or 0.005 Mho. (this can be given as milli, micro as well). The higher the gain and the lower the plate resistance the easier electrons move from cathode to anode (plate).

Inter-electrode or grid capacitance is something we have all heard about from degrading bandwidth to the common practice of adding a neutralising circuit to prevent self oscillation. Just what is the Miller Affect?

In particular the triode thermionic tube is affected by anode to control grid capacitance, the inherent capacitance multiplied by the gain of the device +1.  As the control grid of a tube reflects a very high input impedance the input signal has to charge/discharge this capacitance sinked or sourced through the previous stage resistance. This creates a bandwidth filter. This capacitance can also create a positive feedback loop where the tube could enter into self-oscillation. This is not only inherent in tube amplifiers, especially triodes but also bipolar and FET designs. There are numerous ways to counteract some of the nasty side effects of this capacitance, lowering stage gain, reducing load resistance the of previous stage (plate load), running in common grid (or gate or base) configuration, applying negative feedback etc The tetrode tube was in may engineer’s book a step in the right direction – a second grid was located between anode and control grid minimising the effect of the capacitance (by acting as a screen 🙂 )

Brief word on the tetrode.

The tetrode, which used a screen grid (or accelerator grid) caused other complications one of which was the emission of secondary electrons which bounced off the anode. A suppressor circuit – another grid was then positioned between screen and anode which usually sat at ground potential or was connected directly to the cathode. This was called the pentode, a five electrode device. Pentodes were very popular for high gain, low noise and variable mu used in AGC circuits.

One couldn’t write an article like this without covering tube testers – most vintage gear enthusiasts have either purchased their own (expensive) or did their own research and built one. There are some pretty good DIY projects out there, see below.

A tube tester must have a means to change heater filament voltage, anode or plate voltage, screen grid voltage, ac insertion and of course has a multitude of sockets to test different tube types. We can measure voltage gain, leakage, noise, transconductance, Rp and a multitude of other tests. Modern technology also helps us to build far more sophisticated testers than our forefathers with variable plate/anode supplies, testing the tube in different modes, signal injection and of course, using a computer interface we can program the tester to apply the spec voltages to a specific tube by only typing in the number of the tube. This will set bias, anode voltages and even apply a signal with scope out connectors.Talking about hybrid technology.

To get to the point I do not own or have built one. Looking at the many testers out there I doubt whether it would take a miracle to make one although I have my eyes on an Electronamic.Having said that, about twenty years ago I purchased a CRT tester which cost one tenth of what I see floating around on eBay. Most testers have limited +V and only use a good/bad visual indicator

In conclusion keeping to tube specifications by the manufacturer is a critical part to good design. Cutting corners, bad wiring, instability, poor ventilation and no regard to human safety are all bad starting points. Tubes can last a long time – just stick to basic rules.