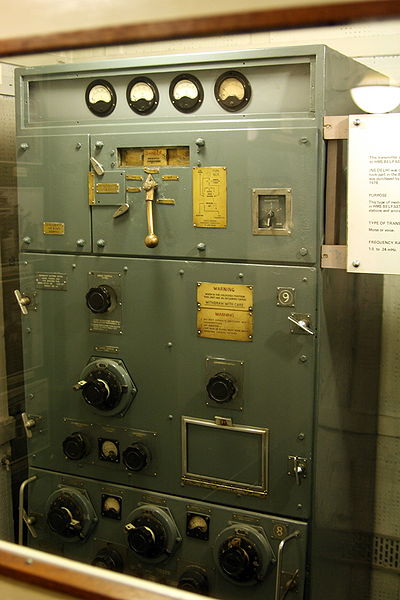 Marine Radio – on a quest for thermionic tubes

So what happened to all the old transmitters from this so called bygone age? With all the tube freaks these days, the power supplies and final stages would come in great use. Working with lethal voltages is not everyone’s cup of tea but with radio installations costing upwards of 10 000 dollars (US) I wonder what these either were sold for when a ship was scrapped or when the equipment was replaced. The changes from HF SSB to INMARSAT was not as vigorous as one would have thought in the 80’s until the changeover to satellite in the early 90’s.

Of course most shipping companies kept their gear – a ship can do many millions of miles before it is beached and marine radio, from an SSB perspective is still with us. Gone are the days of having anything eother than a restricted licence to keep the radios running. Frankly speaking, with the arrival of satellite communication most people may not have been all that convinced considering the expense involved in ship to shore radio traffic. Most shore to ship HF transmissions have ceased but the fun has not gone out of inter-ship communication.

I read in a blog that marine radio communication is simple and fun. I beg to differ. Whether you are a professional licenced operator or amateur there are some things that do apply and two things that come to mind are the maintenance and secondly, just as importantly, the etiquette. Amateur radio has not changed things and won’t either, in fact the same etiquette applies now as to thirty or more years back. Although Marine radio SSB transmitters are certainly much more reliable than many years back the radiation powers are limited – the older transmitters would draw at least 3kW from the power supply. On a yacht this is not something you would take lightly considering the current available. Fishing vessels often only use 12 or 24V DC whilst the larger steel hulled vessels would be a better target for such an installation. Many fishing vessels in the 70s and 80s had more radio installations (and more sophisticated) than a merchant ship. Encryption was also key to security. In the Mozambique channel the Russian vessels would harvest the waters without any fear of intimidation from military vessels. What naval vessels? Some of them were also heavily armed. No, sophisticated MF and HF (and VHF) communication played a vital role in getting these vessels on target every time, cleaning out the plotted route (sometimes unplotted) in a matter of days. (Fish, what fish?)

Whereas marine radio and highly sophisticated sonar (and radar) played a vital part to the fishing vessel making huge profits in the shortest period of time merchant vessel installations were hugely borne out of safety. Everything was around SOLAS and the Geneva Convention. I do not know about today – merchant vessels are no doubt safer after the millenium, liferaft are sophisticated and deployment easier than ever. Nowadays, even the plotting of vessels is done in real time.

Marine Radio: Getting your hands on class C CW transmitters

Going back to the SSB transmitter which could of course be used for CW (more code) as well. Those days are gone. Although we know that most radio stations no longer use CW in any form of communication, the world wide communication stalwart was Portishead Radio, the biggest and best of the 20th century. What really happened to all their comms equipment? Ceasing HF communication midnight 1999 31st August we had a fantastic supply of high powered transmitters, often in the order of 10kW.  For readers of this column think big. We had huge installations in nearly every country on the planet – the equipment, at least most of it, surely was not sent to museums?

For the avid collector of radio valves and high powered gear a search to get this old equipment possibly just for the valves (tubes) and power supplies is not an easy task. Have they all been sold off? I often wonder what happened to all the old Model T’s – were they all melted down or are there a few still lying around in someone’s back yard? Just like the ‘not so vintage’ marine radio HF transmitters of yesteryear. Nowadays they would be worth a mint.

[Editor’s note: Although we may be living in an age not so far removed from the tube era modern enthusiasts, with the implementation of semiconductors, are proving just how popular these devices are. See under the business registrations pages for resellers of thermionic tubes or do a search].