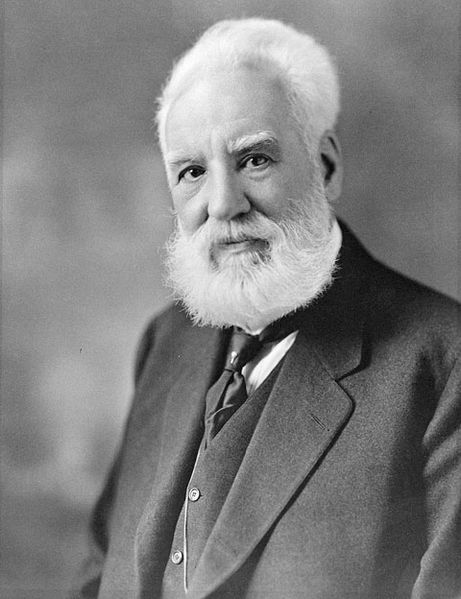 Decibel Measurement – back in time to the A. Bell Transmission line.

Although Decibel measurement goes back to the beginnings of time and many complain about its cumbersomeness in the audio engineering world it is one of the most widely used but not necessarily understood expressions.

Seen that ‘to make your amplifier sound twice as loud you need to increase the power by tenfold’ many times in books and forums? Yes, it is true – your amplifier’s sound output may be twice the power of your neighbours but sounds the same on an intensity level. Even your potentiometer inside your amplifier to turn the volume up and down to compensate for our ridiculous logarithmic hearing properties.

Years back almost all audio equipment would be rated as having an output of x-Watts into a load of y-Ohms and hopefully measured at z-Hertz for i-minutes. This was simple to understand. The preamplifier output was x-millivolts into y-Ohms and if it was just a power amplifier it required x-millivolts into y-Ohms to get maximum power out. Nowadays everything is in dBu and dBm. Confused? Yes, this does create confusion because it means absolutely nothing to the layman but plenty to the layman. We need to go back in time to find some sort of coherence here.

When wanting to express the power supply voltage we would state that the voltage is ‘x’ Volts with reference to ground at a specific point. When fault finding we would be looking at the manufacturer supply rail voltages with reference to a specific point at a certain condition. Always use a reference point and make sure it is the correct reference point. Current seems to be simpler but is not – it is the current flowing through a specific branch of the circuit when the supply voltage is measured at ‘x’ volts with reference to a single point. When doing fault finding you need to know the values of the voltages and currents in a certain fixed condition  – i.e. the amplifier is idle, no input signal, usually input shorted to ground. If this condition is random you will not be able to determine whether the circuit is measuring accurately or not. Often the DC voltage measurement is all that is required but unfortunately the more experienced will tell you that transistors do and can show proper B-C-E or D-S-G readings but in fact have low gain. I have found this often in video circuitry. (television receivers and radar displays).

You can always calculate either resistance, voltage or current by also knowing only two of these parameters and using Ohm’s Law determine the missing:

The Watt is a measurement of power and needs the user to know at least two parameters to determine the power value; P = I x V, P = (V^2)/R or P = I^2 x R. This power rating is known as DC Power. AC power ratings are more complex.

The Decibel is one tenth of a Bel (Alexander Graham Bel) – one Bel is a very large quantity. The Decibel or dB is not an easily understood ‘unit’ as can be determined by the amount of times its usage is misconstrued in forums and articles on the internet. The Decibel (dB) is logarithmic and is used to determine the ratio between units of power (e.g. preamplifier input versus preamplifier output) or units of field (voltage amplitude) where this ratio can be amplified or attenuated, indicated as +dB or -dB respectively. The formula is as follows:

The other instance of dB usage is when determining the ratio between two fields, usually amplitude as in V R.M.S:

What is the difference between these two? Nothing really. Power is proportional to the amplitude of the voltage over a known resistance, rather as in a.c. circuits this would be measured as an impedance and not as a resistance which we like to think of as a d.c. component (measurement) and is purely resistive meaning no inductive or capacitive components. Going back in time the original measurements were taken over one mile of cable at approximately 800Hz to show the attenuation. Beyond a certain attenuation the human voice may have sounded unintelligible or not at all. Television antennae should show their gain in dB.

This leads us to the standard formula for making fast calculations to determine voltage or power gain where we have substuted Ai and Ao for V1 and V2. Remember these two values are interchangeable to determine gain or attenuation. Note how the 20Log(A1/A2) or 20Log(V1/V2) through manipulation is now equal to 10Log(P1/P2) – remember that the dB is a unit. 2.54cm will always equal one inch. 1dB will always equal a voltage gain of 1.12 and power gain of 1.26.

And the Reference is? The Decibal Measurement reference check.

In electronic circles we often hear of dBm. This is the logarithmic unit of power equaling 0dBm, where the output power of 1mW (one milliwatt) at 0.775V R.M.S. is dissipated into a load of 600 Ohms. This was the original transmission line equation for the dBm. However, as shown above if the known is 1mW then all other values can be calculated if the load resistance is changed.

So what is the formula?

Many enthusiasts throw around the equations above as if there is no tomorrow but I will get back to what was repeated time and time again in the beginning – the reference. As we have used 0.775V as a reference we forget that this applies to 1mW dissipation into a 600 Ohm line. We always need to remember this – if the voltage was 0.775V R.M.S. and the load resistance was 8 Ohms would we still be sitting at 0 dBm? Not at all. It is now 18.4 dBm. Or if the load was 0 dBm and the load was 8 Ohms the voltage is now 89.4 V R.M.S.

The pitfall here is the 0.775V reference – today we use the dBV (not lowercase ‘v’) which has no bearing on the load resistance.  Another well used term is dBu (lowercase ‘u’) which refers to unloaded at 0.775V.

The most important lesson here to note is that the 0dBm was originally intended for a power dissipation of 1mW into a load of 600 Ohms. (possibly a terminated transmission line).

Brilliant online calculator to see exactly how it works at Daycounter.

Coming up this week: SPL