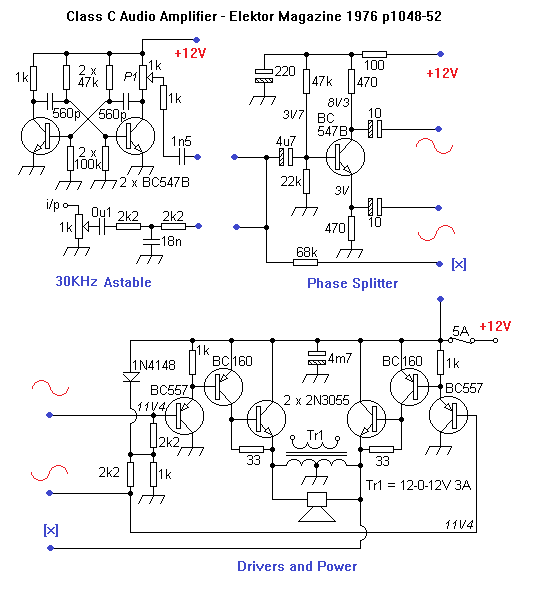 In the quest for building things quick and cheap here is a list of some of our Parts-Ring all-time favourites including links to websites with interesting information. Some of these circuits are really old and if we have plagiarised content we apologise up front – please drop us a line at webmaster@parts-ring.com to have us remove this material.

Years back all power amplifiers seemed to use the 2N3055 (100W) or PL909 (200W) in the output stages.  Yes there were other transistors available but the 2N3055 cost a fraction of a dollar and the output was more than sufficient to cause damage to one’s ear drums in a small to medium sized room. The PL909 or 2SD555s were a different beast, expensive but more then ample. Think of Pink Floyd’s music system and you could be rest assured that main stream music groups of the era were using HiWatt or possibly Phase Linear equipment.

Cheap and Not so Nasty

These amplifiers were built in their thousands years back but there was one horrible feature albeit a great safety one, the coupling capacitor.  The BC286/BC287 transistors acted at the complementary drivers thereby driving the inputs of the 2N3055s out of phase, the BC107 and preset set the bias.  Uncomplicated and great for parties. Let me know if this circuit or image is copyright – I will remove it immediately (I found this in my image files library).

Personally I have heard both and could not tell the difference. Two trains of thought though and both unfortunately slam-dunked by George Sziklai for his complementary Darlington design which silenced the gurus – see here. Two links for the price of one – read and enjoy. Why use quasi complementary – prices of PNP transistors in the silicon era.  Most amplifiers I saw were of Germanium construction and only PNP but never high power, normally in the order of a watt or so. (AC127/128 and then big brothers AD161/162). Silicon changed all that. There’s tons of information on transistor output stages so read up and become an expert.

Well, this was a new chapter in our book. As a student we learnt all about class C which was used in CW transmitters – key on and key off. Along came Elektor magazine and put paid to the myth that anything that doesn’t have tons of bias will have a load of crossover distortion – this amplifier did indeed have lots of distortion but for drunken bachelor’s parties in the bush this worked a treat.

From The Zaniest Audio Circuits Book of all time…

The transformer used was one from a battery charger, I used identical components and it took about two hours to put together. A really classic design but more importantly – the zaniest circuit I have ever come across. Well pertaining to that time of course… In those days bridging car amps were the order of the day – maximum rating was about 20W per channel. To be honest at low input levels I could hear the cross switching distortion but as one turned the volume up it became less noticeable. The first real test was indeed at a bachelor’s party and it did outperform the car amplifiers of the day in terms of power. The more drunk we got the better it sounded, especially when listening to Uriah Heap at full tilt. Possibly the most fun we ever had from an amplifier.  It was eventually sold off. The circuit scientists recommended dropping the load impedance and putting in higher power transistors – this could also be done by the paralleling of the output 2N3055s and upgrading the driver transistors. I never tried that though.

The fact that the transistors were biased to off was overcome by driving them with a 30KHz square wave. Ingenious.

As a Student – where to build real audio circuits

As a student we were always on the lookout for cheap circuits, fun to build and of course the higher the power the better. We always seemed to revert back to the 2N3055 and if you had the money the 2N3055/MJ2955 amplifiers.  (Power) MOSFETS were no where near as commonplace as they are now – FETS were used in audio preamps and frankly I don’t know why. A lot of the marketing was around the low noise but really I could not tell the difference between one cheap pre-amp kit to the next cheap pre-amp. Of course a manufactured unit was ultimately superior with ten times the price tag.

The most popular design was the one used by (sorry to always revert back to this one) Don Elliott of ESP – the 60W complementary output stage was well balanced – by this I mean from an impedance and gain point of view, usually both transistors used would have been matched if it was in kit form. See here and note that the top circui (fig 1) is not the one to build, see figure 1a where there have been changes made to reduce idle current (and also includes a bias adjustment trimpot).

If funding was not a problem years back I think there would have been many ETI480 kits built (200 / 300W per channel) – they were expensive. The MJ15003/04 series transistors are still available and still expensive. There are risks of purchasing counterfeit transistors if purchasing through eBay so be careful. Modern transistor design has however made it far cheaper to build high powered amplifiers compared to 30 years back – anything over 50W per channels was termed ludicrous and possibly this may be the reason that 70 year olds can still hear today. 50 year olds cannot. Clinical tests over the next twenty years are going to return some very interesting results with regards to our hearing and especially car audio.  Students of electronics are no longer as interested in audio as they used to be – Class D amplification seems to be the more popular topology and of course, more interest in the mobility and smart phone sector. I doubt this is a passing phase – youngsters today are more interested in social networking and their iPods, docking stations, pirating music, videos and games. Possibly what we would be doing if we were that age now but on a far greater scale. 👿

Know the differences between MOSFETs and BIPOLAR transistors – and which is better for your application.  There has been a long standing feud between rival manufacturers but does it really matter – go to the EE site.

Something to look up:

Look for Class G and/or Rail Switching Amplifiers. Food for thought and yes, the thought has been around for some time. Again, modern topology has made this an interesting design to factor into high efficiency systems. Again, my personal view – more to go wrong. Also, more influence on the signal path. Nothing like a good quality class AB system to get your hearing in tune. Of course my amplifier at home uses Rail Switching and of course I have over-driven it, really abuse it and it just goes on and on. So much for more to go wrong. Next time I’ll get my facts straight first. 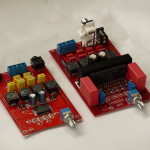