Aiwa didn’t move like the proverbial mouse and his cheese and became a member of the Sony clan. Although Sony is one of the most remarkable electronic companies around I wonder if they are also not possibly facing a too stiff competition from the Koreans. Viewsonic badged Panasonic monitors started getting made in China and my own feeling was that the high end stuff started falling over. Chinese mass produced sound systems are not like yesteryear – very much like the Japanese taking over the auto market the Chinese are coming into their own. Some of their cheaper loudspeaker drivers are starting to compare to the high end drivers from the British in the 90s. I wouldn’t be surprised that in the next five years the Chinese systems are going to be better – leaving snob value where it belongs, in the toilet. We all know what Bob Carver was famous for. I think Aiwa was better than Sony and Technics was better than Panasonic. I hear Technics was the high end part to Panasonic. Or was this where the company actually really focussed on audio gear. Modern class D audio amplifiers cost a lot of money. Why? I think our friends in Asia are going to beat the demons in the west and start mass producing audio modules at a better price and no doubt better quality as well.

As most audiophiles will tell you – poor power supply, poor audio. This has always been an amplifiers inherent weakness. Keeping costs down is not difficult considering what bridged mode power IC amplifiers cost these days. You can build a 100W RMS amplifier without a power supply for under 20U$D. In comes the power supply and up goes the price. Many amplifiers are not built to continuously power ALL channels simultaneously – the mains transformer is under specification.  Quick rule of thumb Vcc squared / 8RL gives you the continuous power an amplifier can produce at say 1000Hz.  e.g. 50V DC rail and a 4 Ohm speaker = 2500 / 32 = 80W. The reality is that as the amplifier is driven, this DC voltage drops and so the possible power output drops as well. When the amplifier is driven hard a poorly designed power supply no longer supplies DC but modulated DC, modulated by the mains frequency. Please note that I am over simplifying this – but the fact remains – poor amplifier performance is often caused by the power supply. Big amplifiers need big transformers, big electrolytics and why not regulate the DC supply. Big RF transmitters use massive transformers and regulation. The last thing one wants in a transmitter are supply rails dropping under load – You’ll have the FCC round in a flash. The same applies to an audio amplifier, except it’s your ears that will complain. Mush, hum and loss of bass.  Unfortunately big transformers cost a lot of money. Many years back a well known Britsh audiophile (I think it was John Linsley Hood) ran an article in either ETI or Elektor where they take a cheap and nasty audio amplifier and beef up the supply. The end result was all in the spec. Better bass response, better tonal quality and more headroom. All with a regulated power supply. Guys wanting to experiment at home could always try this on a soon to be discarded audio setup. It is advisable to change the output transistors though – power outputs are considerably increased for a given drive level.

So anyone wanting to buy a new shelf system just for their listening pleasure maybe should be looking at their existing system and do some modifications. There’s lots of used amplifiers out there just waiting for a quick power supply upgrade. 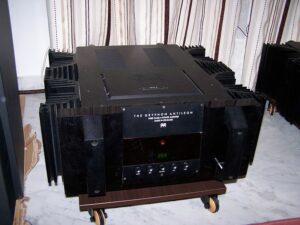